Back in October last year I wrote an article titled “Who is Ali Moulaye and why does it matter” little knowing at the time that, in many ways, it would change my life.

It was a detailed article and contained lots of references to a whole host of UK Limited Liability Partnerships (LLPs) which, for various reasons attracted the attention of many investigative journalists who have since been in touch with all sorts of requests for help and information.

And it’s been fun!

Revisiting the article the other day, my eyes were drawn to a mention of a firm called “Green Trace LLP” and, following a hunch (I have a lot of those) I decided to revisit its filings page on the UK Companies House website.

Apparently, the accounts for the last four years have all been amended.

Before we look a little closer, it might be instructive to set out a chronology.

All the original accounts were signed off by the eponymous Mr Moulaye who, as I say, achieved somewhat reluctant fame following the publication of my article (which is now the first hit on Google if you search for “Ali Moulaye”). It is also true to say that, since publication, he has ceased to sign any more accounts, a mantle which has been passed on to Kang Dong-Hee (about whom I wrote in a following up article called “Goodbye Ali Moulaye, hello Kang Dong-Hee” also published here on LinkedIn).

And, lo and behold, all of the amended accounts have indeed been signed off by Mr Kang.

I also know that my original article was read by a number of people who may have been less than happy to see such a public exposition of some of these obscure British LLPs.

Because if you do a bit of digging on the internet, you find out that Green Trace LLP is the parent company of a Latvian firm called Green Trace Ltd. See for example: http://www.hoovers.com/company-information/cs/company-profile.green_trace_sia.eeda0315784bb408.html

It appears to be quite successful as, according to this report (in Latvian – you’ll need to use Google page translate) its turnover for the year ending 2017 was a little over €96m returning a gross profit which had increased by nearly 25% to a little over €7m.

I can’t help but wonder if mention of Green Trace in my article shone a small beam of light on these facts, which might just have been the catalyst for filing the amended accounts.

Why do I think that? 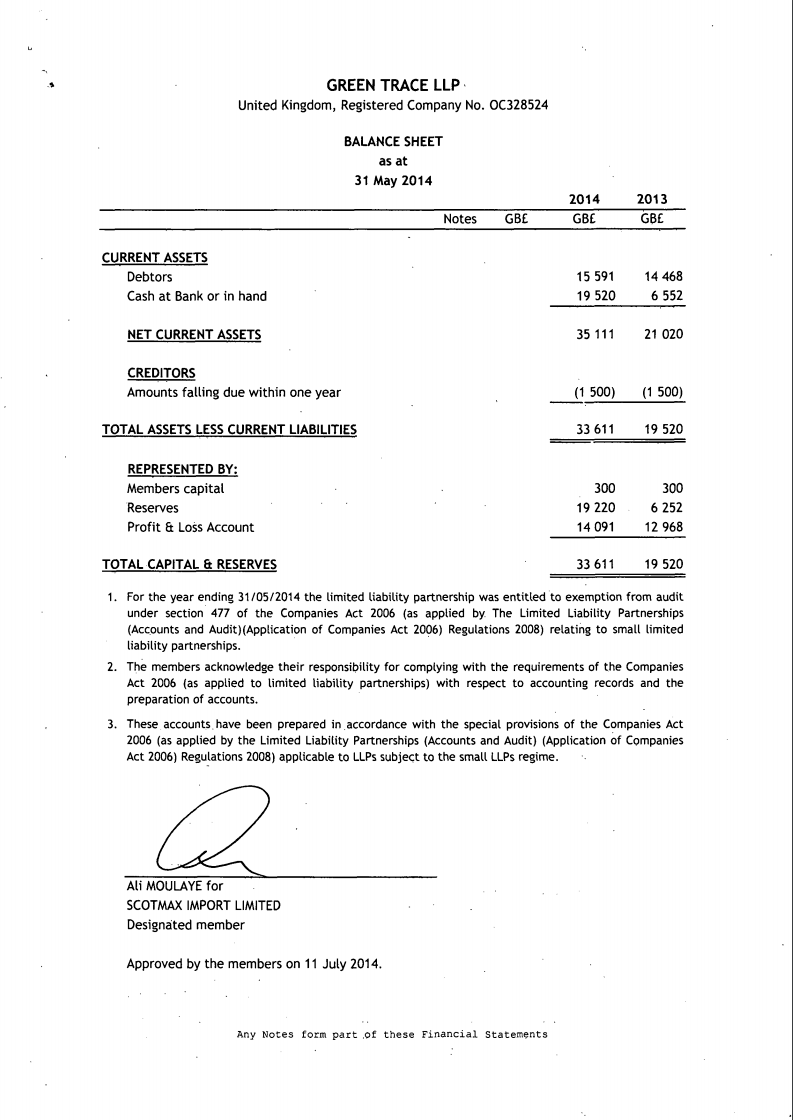 And now here are the amended accounts (the Kang Dong-Hee versions):

I realise that it’s the easiest thing in the world to forget about the £60m of loans and investments which accidentally got missed from four consecutive years of accounts.

And, apparently, none of the healthy profits which Green Trace is making is finding its way back to the parent company which has a mere £371 in the bank.

The other interesting thing, which again I will mention without comment, is that the declared Person with Significant Control is one Petr Cechmanek, who lives in the town of Prostejov in the Czech Republic, a city with a population of a little under 45,000 and which, hitherto, was famous for producing tennis player Petra Kvitova. Despite being the only PSC for this company which owns a Latvian firm turning over nearly €100m annually, Mr Cechmanek appears to be completely anonymous and I can find absolutely no connection between him and the company.

But then, so much that occurs with these LLPs that have connections to a whole host of Eastern European countries with very little to connect them to the UK is weird.

I wonder what on earth is going on?