They are the legal entity equivalent of a PSC.

A Person with Significant Control.

That’s not a lot of help, actually.

OK. A PSC is someone who is in a position to exercise control over a legal entity, whether that’s a limited company, limited liability partnership, limited partnership or whatever.

How do you work out whether they are in a position of control?

You mean my other questions weren’t any good?

No, just that your last one was a bit more interesting.

You’re welcome. Anyway… a PSC is established where an individual (natural person) meets one or more of the following conditions:

iii.           An individual who holds the right to appoint or remove the majority of the board of directors of the company

iv.           An individual who has the right to exercise, or actually exercises, significant influence or control over the company

v.           Where a trust or firm would satisfy one of the first four conditions if it were an individual. Any individual holding the right to exercise, or actually exercising, significant influence or control over the activities of that trust or firm

Why is that last bullet point in bold?

Because that’s the one which relates specifically to RLEs.

OK. But there’s lots of stuff in your PSC explanation that I’d like to understand better.

I know and I’m going to write another article very shortly all about PSCs. But for now, I’d like to focus on RLEs. If you don’t mind?

Picking up on definition ‘v.’ where a trust or firm (and for this example, I’m going to focus on firms) holds more than 25% of the shares or voting rights in another company or it has the right to appoint or remove the majority of the board of directors it must be considered as a PSC and special rules apply.

I was just about to tell you if you wouldn’t mind being a bit more patient.

Ooh touchy. Go on then.

Thanks. An RLE is registrable (i.e. it can substitute for a natural person PSC) when it meets one or more of the following requirements:

ii.                  Is subject to the Financial Conduct Authority’s disclosure and transparency regime; or

Because the whole point of the regime is transparency and it is assumed that, if you meet one or more of those requirements, the transparency rules are met.

So if your PSC was a Relevant Legal Entity by virtue of being a limited company registered with Companies House, you would be able to look up that company and find its shareholders. Any holding over 25% would be a PSC and would need to be declared.

Similarly, if the company is subject to FCA Rules or listings requirements of recognised stock exchanges, the beneficial ownership information is straightforward to obtain.

It’s only when they don’t meet those rules it becomes complicated and becomes non-registrable, meaning the natural person(s) sitting behind that company should also be disclosed.

Can you show me an example or two?

I think that would be helpful.

My own company, GR Business Process Solutions Ltd. is, of course, required to file its annual accounts and shareholder details with Companies House. If you go and have a look (GRBPS Ltd.) you’ll see from our Annual Return that there are four shareholders, all fully disclosed, holding 25% each of the shares of our company, therefore none of us qualifies as a PSC.

Does that mean you can only ever have three PSCs?

Not exactly, because of the significant influence and control requirements but, generally that’s correct.

Now let’s look at a rather more problematic example.

It is, but just let’s be clear that this example does not come with any implications of wrongdoing, just a few anomalies which may have arisen through a misunderstanding of the rules and typographical errors.

The company I’m going to look at is called Lehram Capital Investments Ltd.

Why did you chose that one?

That’s just too complicated a question to answer right now. Let’s just say I happened to come across it and there were enough things of interest to make it worthwhile using as an example. 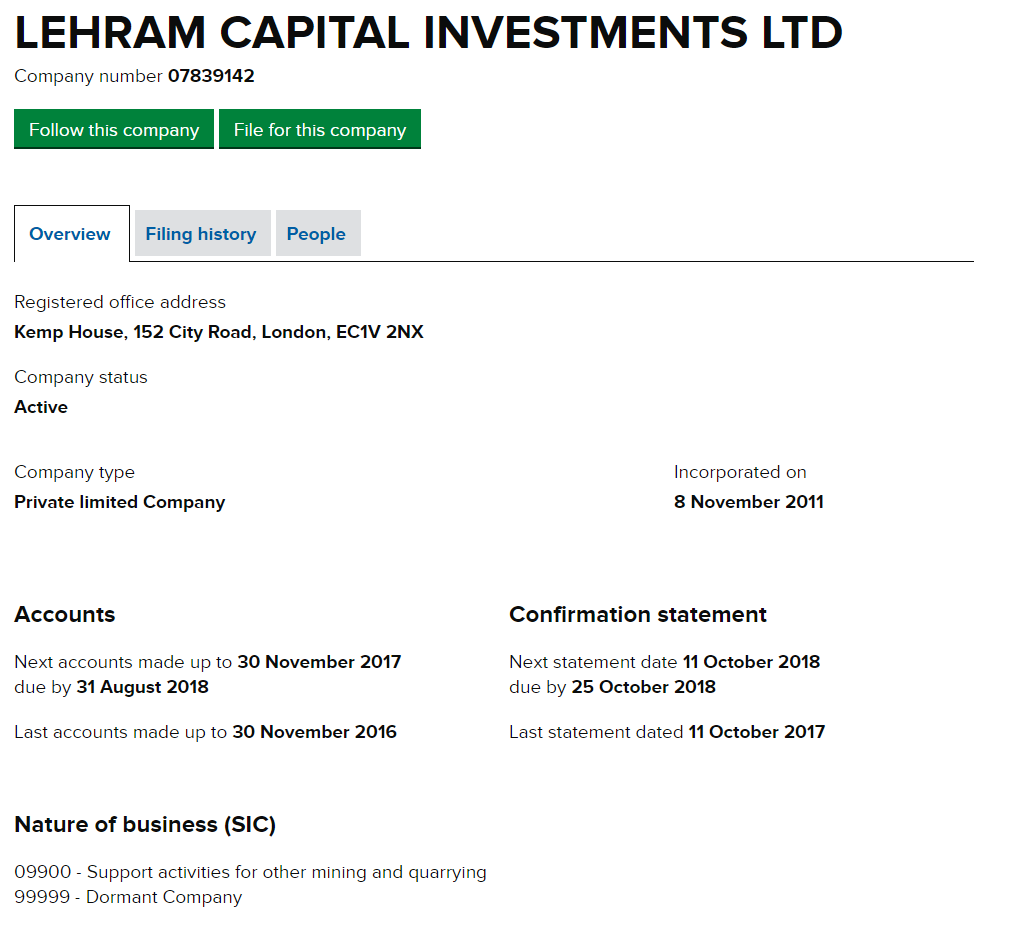 So, you can see it’s been running for seven years, it’s got two SIC codes. One appears to be for support activities for mining and quarrying and the other is for a dormant company (which presumably means that, when it does start trading it will be the support activities as defined).

So who’s in charge?

Let’s have a look, shall we?

Igor can’t make up his mind whether he wants to be director or not!

I see he’s from Khazakhstan and Julija is from Latvia. She didn’t last long either. Let’s look at page 2.

It would seem that Julija is happier being company secretary than she is being a director!

And now we’ve got a couple of Russians thrown into the mix as well.

Why is it that everything you write about always ends up with Russians?

Shh. You’ll get me into trouble. I might explain more at the end of this article.

It’s my way of keeping people reading until the end. It’s a writing technique and now you’ve made me give it away.

I should think so. Let’s move on to page three.

Whoa! There’s a lot of stuff happening on that page, isn’t there?

Too right. Igor Rudyk is showing as “Active” even though the first page shows he resigned on 17 August 2016. And we’ve now got a Colombian and a BVI company thrown into the mix. Gosh, this has turned out to be a very cosmopolitan dormant company! And that address in BVI is just plain weird.

Shall we have a look at their PSC?

So, what do you make of that?

What don’t you understand?

How this company can be a Relevant Legal Entity PSC.

The address is even more rubbish than before. And it doesn’t seem to meet the criteria of either being subject to its own PSC requirements, supervised by the FCA or listed on a relevant stock exchange. Shouldn’t it have to declare its natural person owners?

Excellent analysis! And, yes you’re right. It should. Let’s have a look at the filings. By the way, have you notice that there is a difference in the spellings between the officers page and the PSC page?

I think we definitely need to see the filings.

The notification and appointment was on 19 September 2016 so that’s the place to start.

This is getting quite exciting.

Blimey, you’re starting to sound as sad as I am.

Oops. Sorry, I forgot. This style of writing is very confusing.

“Hasborne Oversees Limited”. Like it says on the PSC page. So where did the other spelling come from? 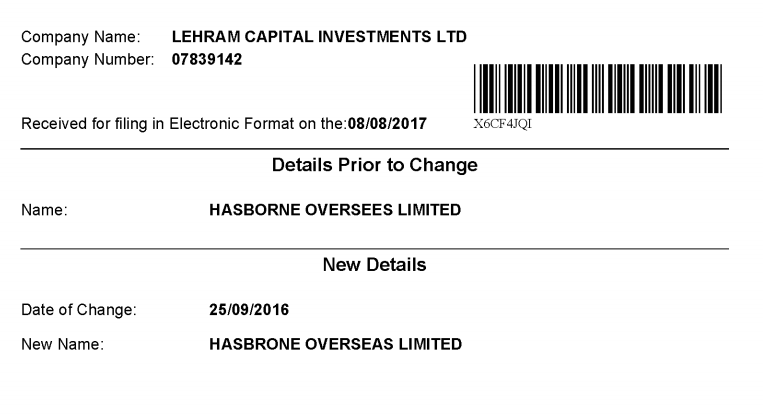 Shall we look online to see if we can find some sort of independent corroboration?

Come on then. Let’s see it.

Hold on. That’s the old name before they changed it.

You could get the company profile?

It’s your money as well you know.

Let’s see if there’s anything on line about Lehram.

Good idea. By the way, we’ve rather moved on from the whole RLE thing.

Yes and no. Given that the RLE provided here wasn’t registrable (and, on the surface at least, CH shouldn’t have allowed it) it’s instructive to look under the covers to see if we can find out why.

True. And it’s the longest we’ve spoken to each other for ages.

But I’m talking to myself!

I rest my case.

Wow! There’s an article in the FT

Hang on. They declared a dormant company. Have you checked their accounts?

Yes. Every year since formation. Dormant every year.

So how did they manage to buy a coal mine in Khazakhstan?

That’s the same thing as you telling me.

Stop it. It’s getting confusing.

Let’s not go down that route again, shall we? Shall we look at the rest of the article?

So if they bought a mine, were represented by an “international law firm” and so on, surely all this should be in their accounts?

You’d think so, wouldn’t you.

And who is Daniel Rodriguez. He doesn’t appear anywhere on the filings.

I assume he’s the controlling shareholder of Harbrone, or Harborne or whatever it’s called.

I thought the point of the PSC regime was to stop you having to assume?

Yes, it means “truth” in Russian. Although I’m not entirely sure if that’s an example of Russian irony or not.

Isn’t Alexander Shchukin one of those oligarchs?

Yes. Here’s a bit about him from a British online news source called swns.com.

Gosh. Isn’t that our story?

Partly, yes. Let’s go back to the Pravda story. Here’s the rest.

And Roman Abramovich! And all that in respect of a dormant company that hasn’t disclosed, at least anywhere we can see, who its real owner is. And apparently has tried to obfuscate the legal entity which the real owner is sitting behind. And which is employing international law firms whilst continuing to file dormant accounts. It’s not a great story.

You never did tell me why you looked at this in the first place.

I’m not sure you’d believe me if I did.

Of course I would. I’m your better half, aren’t I?

Debatable, but I’ll tell you if you want me to.

OK. There was a story on the news this morning about the online investigators Bellingcatwho have identified the Russian commander who may have been responsible for the downing of MH17. He’s called Oleg Ivannikov. I thought I’d have a look on Companies House to see if he had any interests in UK legal entities.

Because that’s the way my mind works.

No, but Evgeny Ivannikov did.

What, the guy who was a director of Lehram for 9 months?

Just about the least important person in this whole story?

So this whole investigation came about by chance because you looked up someone completely different on CH and found our one instead?

You know what this means don’t you?

There must be hundreds of similar stories lurking behind the façade of transparency. This sort of stuff just doesn’t keep happening to the same person over and over again unless there’s lots of it out there.